French bulldogs are fashionable companion pets, comedic stunt artists, and fabulous babysitters. Some of their hobbies include rolling on Rumba’s, napping while standing, and stalking their pet parents.

French bulldogs are amazing dogs. They are happy all the time, as cuddly as can be, and they find the concept of personal space to be a joke. They’re small, bright, goofy, easygoing, well-mannered, and non-aggressive, and thanks to all of their great qualities, they ranked second place in the dog popularity “contest” of 2020. French Bulldogs are somewhat new as a breed. They’ve been around for about 200 years, and in that time, they hardly ever had any competition when it comes to pet popularity. People love them for their fun personality, calm temperament, and sweet nature. They can be trained fairly easy, they’re more than comfortable in micro-apartments, they love deeply, and they are absolutely gorgeous. 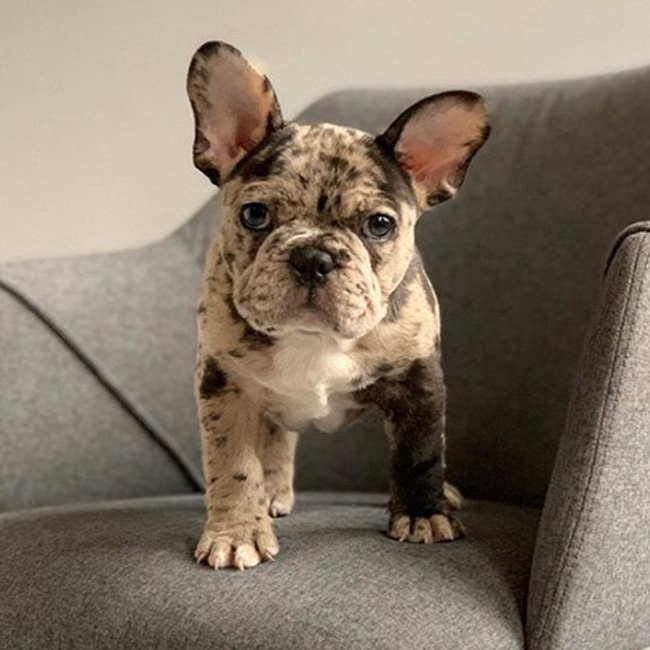 The French Bulldog is a loyal and highly affectionate dog, and whether you need it or not, he will give you all of his unconditional love and attention. You can try leaving the room without him and you might even succeed, but just know that even while he is napping, his eye is on you. French Bulldogs take affection to a whole new level. They are known to love their humans more than they love their food, and that’s saying something because Frenchies love their food!

The Frenchie knows how to enjoy life and he never gets bored. He either spends his time attacking the scandalous mop that’s sweeping across the kitchen floor, sleeping in his water bowl, or simply hanging out with his favorite human on the couch being silently judgmental. He cares deeply for his pet parents and whatever they do he wants to be a part of it.

French Bulldogs have a great love for all things on wheels. You’ll find them riding skateboards, kiddy cars, wagons, and even baby carriages. They also enjoy couch climbing, swimming, and flying high, but bless their little hearts they can’t do any of those things.

French Bulldogs are not particularly active dogs but they do like chasing balls, playing games of fetch, going on short jogs, and having play dates in dog parks. 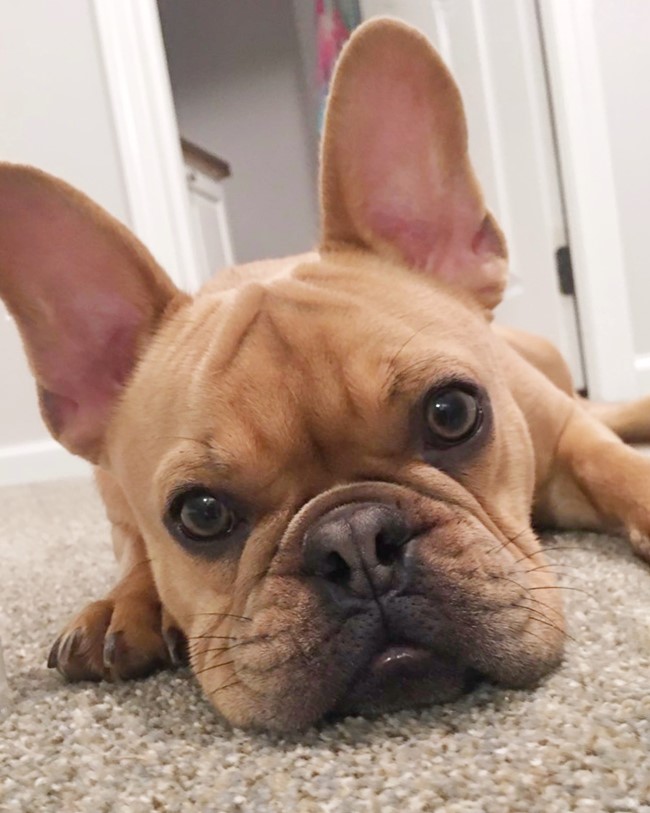 French bulldogs and kids are a perfect match. French Bulldogs are among the best companion pets for children. They are playful, fun, patient, and gentle dogs, and they are famously known to be excellent babysitters. Frenchies lack aggression, they aren’t jumpy or easily scared, and they are the perfect combination of fun and calm. Children love French Bulldogs, and Frenchies love children. They are easily entertained by one another and it’s highly unlikely they could ever get bored together. French Bulldogs are highly social dogs. They love people, kids, dogs, cats, and strangers in equal measure. They like discovering and exploring new places, meeting new people, and they are terrific in multiple pet households.

The French Bulldog puppies will keep you in a giggle fit from dusk till dawn. They can sing, wiggle their bodies when they move, they like to eat and sleep at the same time, and they resemble little gummy bears. Frenchie puppies are hilarious in everything they do. They spend most of their time attempting to climb couches so they can be near their humans, but they always end up flipping backward like some really bad acrobats. They sleep in the weirdest positions and places. You can find them spread across the floor doing the splits, sleeping half in their dog beds and half on the carpet, or on their hindquarters leaning against a wall napping.

French Bulldog puppies are energetic, cute, and joyful. They like to spend their energy exploring every nook and cranny of the house, cuddling, and trying out new tricks. They thrive on attention, love to be pampered, and they could snuggle you for hours on end without a care in the world.

Frenchie Bulldogs are generally quiet dogs (bark-wise). They are not known to be big barkers but they will yell at you when your phone rings. They are not overly vocal throughout the day but they do alert an approaching visitor. They also have a hilarious snore, and they make funny sounds when they breathe, so in that aspect, they might not be so quiet. French Bulldogs make wonderful watch dogs. 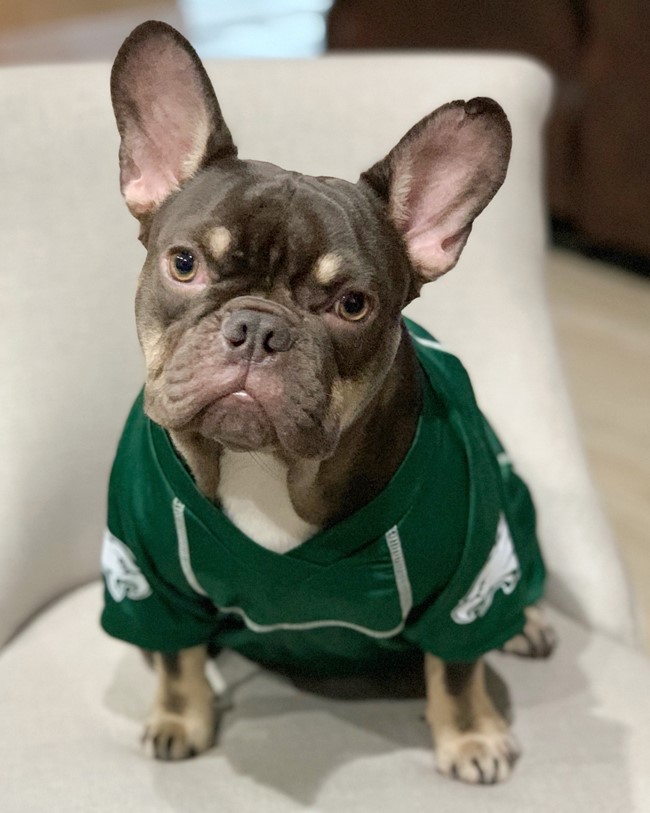 Training a French Bulldog is like rolling a dice. While most Frenchies are easy to train and fast learning students, some use their big bat ears to completely block out their trainer. That being said, even stubborn French Bulldogs can be trained with the right motivation. They respond best to positive reinforcement and they love their dog treats. If you keep training sessions short, fun, and filled with delicious treats, your French Bulldog will surprise you with his eagerness to learn. You can teach them basic commands, tricks, and even take on advanced obedience training if you feel brave.

The French Bulldogs are a fairly new breed when it comes to dog history.
There are many theories on how the French Bulldogs came to be, some more plausible than others. Some theories claim that the breed originated in France as a terrier and bulldog mix, while others say that the dogs originated in Australia or England and later traveled to France where they were renamed.
The theory that has the most historical documents on the breed points to the fact that the French Bulldogs originated in the small working village of Nottingham England around the beginning of the 19th century as Toy Bulldogs. The Toy Bulldogs worked as ratters in mines, mills, and factories alongside their pet parents. When things took a bad turn and the Industrial Revolution hit, the English workers left Nottingham and headed out to France for better job opportunities taking their companion pets/utility dogs with them. Soon after their arrival, the Toy Bulldogs spread out and conquered France with their unique looks and quickly became the most fashionable companion pet in the country. The Toy Bulldogs were eventually renamed French Bulldogs and received their official recognition in 1898 by the American Kennel Club.
The French Bulldog is also known as Frenchie and Bouledogue Francais around the world today.

French Bulldogs are small and mighty dogs. They carry themselves proudly and with unmatched confidence. Their appearance is happy, fearless, and at the ready for some mischief. 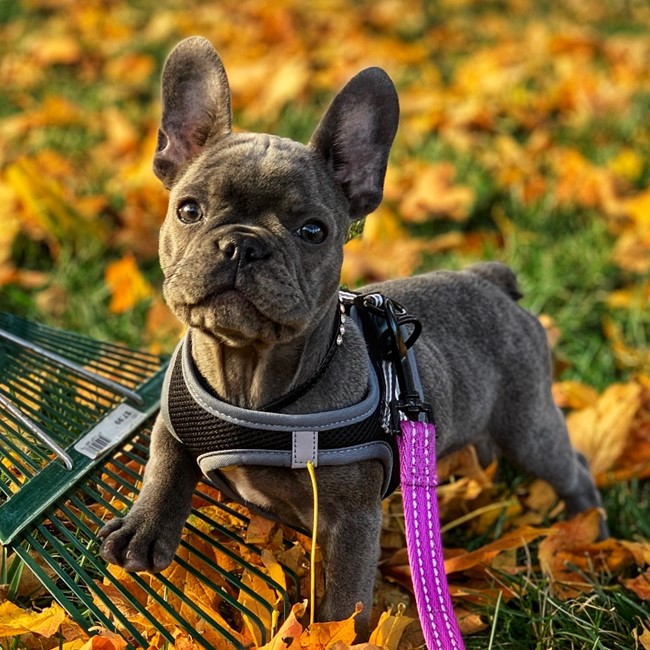 Built like little war machines, the Frenchies are strong, muscular, and sturdy-built. They have a broad deep square-shaped and short muzzle, a black or light-colored nose, round eyes set wide apart, and their signature look – large upright bat ears. A full-grown French Bulldog is 11 to 13 inches tall and weighs between 22 to 28 pounds, with the adult female French Bulldog weighing 16 to 24 pounds. The French Bulldog coat is short, straight, and soft, and can be white, black, gray, cream, fawn, brindle, merle, fawn brindle, and various combinations of these and/or other colors. The Frenchies isn’t considered to be a heavy shedder, he sheds very little and thanks to his short coat, the shedding is manageable.

Taking Care of a French Bulldog

French Bulldogs are low-maintenance. If you give them love, cuddles, treats, a weekly brush, and a bath every couple of months, they’ll be squeaky clean, pretty, and without a care in the world. That being said, it is beneficial to give them a massage now and then because they really love that, and make sure to clean their faces, teeth, and ears regularly.
French bulldogs have fine short coats, and even if they shed occasionally, they won’t have your house looking like all of your pillows exploded. Keep in mind that even if they are only occasional shedders, French Bulldogs have a double coat and are not considered to be hypoallergenic. They are likely to cause allergic reactions to those suffering from pet-related allergies. 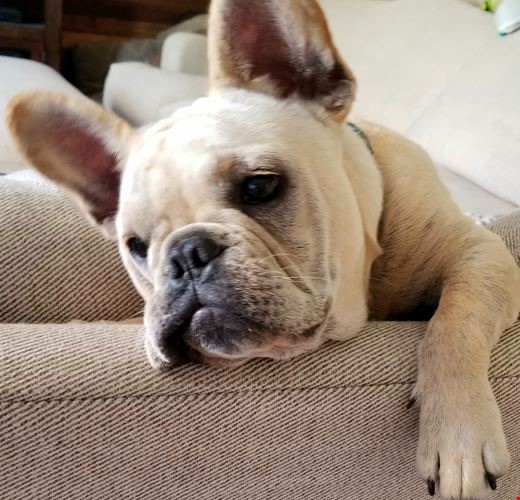 French Bulldogs are laid-back and relaxed dogs. Their energy levels are low to moderate. Frenchies have a short muzzle, and they are not built to withstand any kind of serious activity. Dogs with short muzzles can’t breathe in too much air at once, and if they are over-exercised, they can have breathing difficulties. Frenchies are very fond of couches, beds, and laps. Add some treats to that, and you have a loyal friend for life. When they are not zooming around your living room, they prefer to spend their time lazing around and being spoiled. A short daily walk is enough to keep the French Bulldogs happy and in their perfect tank-like shape.

Frenchies don’t do well in hot weather. Their short muzzles prevent them from being able to regulate their body temperature and this can be very uncomfortable and even dangerous for them. Keep walks short during hot summer days and be aware of your French Bulldog’s breathing at all times. If your Frenchie starts breathing fast, it’s best to end the walk and head home for some well-deserved relaxation. 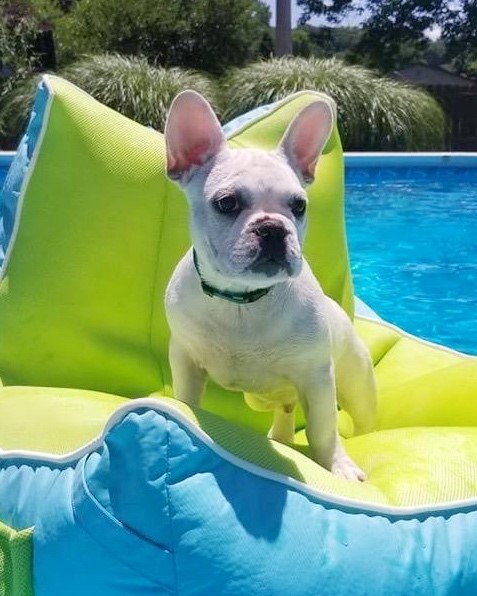 French Bulldogs can’t swim. They are very fond of water but they are just not built in a swim-capable way. Never leave your Frenchie unsupervised near a swimming pool, big or small. If you do wish to take your French Bulldog swimming, make sure to get him a canine-friendly floaty or life vest that fits him perfectly (if the vest is too big he can slip out of it).

French Bulldogs love food. They love their dog kibble, puppy treats, and canine-friendly home-cooked meals. Give them a pig and they will eat it whole. That being said, some Frenchies are prone to obesity and it’s best to keep their meals on a strict feeding schedule. Depending on their size, French Bulldogs need to eat around one or two cups of kibble each day, divided into two meals – breakfast and dinner.

French Bulldogs are family-attached dogs. They are entirely devoted to their humans and they have a strong desire to be near them at all times which translates to - they hate being left alone at home. The best way to deal with this and avoid separation issues is to teach your French Bulldog puppy that you leaving home is just a temporary situation. Take precautions and train them to be independent when they are very young puppies and you will be just fine.

The health of your new family member is our primary concern. We take all necessary precautions from vet inspection of our pups to their parents requirement to pass annual exams. If there’s something undiscoverable at 8 weeks of age that later comes up as hereditary or congenital, you’re covered. We stand behind our pups with up to a 10 Year guanrantee.