The Havashu are charming, lively, playful, and highly affectionate dogs. Their sunny disposition and darling personalities have made them one of the best family companion pets around. They are welcoming towards strangers, they share their toys with furry friends, and they adore kids. The Havashu is a dog that knows how to have fun. He enjoys swimming during summertime, chasing, playing ball, and jumping in piles of snow during winter. When it comes to his family, the Havashu has nothing but unconditional love to give. His mischievous ways will keep children amused around the clock and his positive mood will light up every room.

The Havashu is a hybrid designer breed crossed between the Havanese and the Shih Tzu. While both parent breeds have a pretty impressive history – the Shih Tzu dates back 800 years to ancient Tibet while the Havanese first surfaced in Cuba around 1500 – the Havashu himself is fairly recent. Like most designer hybrids, breeding began 30 or 40 years to when breeders first began crossing pure-breds to create smaller, gentler and hypo-allergenic variations of the breed.

They have round heads with dark eyes, a black nose, and ears that hang down alongside of their head. With shorter legs in the front and longer ones in the back, the back half of this breed appears to be slightly raised. Their tail is medium in length and curls up towards their back. Their coats rely mostly on which parent breed they take after most and will be wavy to curly in texture. Their coats also come in a variety of different color combinations, including brown, gray, cream, black, white, and sable. Due to the texture of their coat, it will need to be brushed a few times a week to keep it healthy.

A spirited and loyal breed, they have people-loving personalities of the Havanese and the stubborn, feisty nature of the Shih Tzu. A people pleaser by nature, this charming little pup will get along with any family member or pet. Like many smaller breeds they do come with a stubborn streak and an inquisitive mind that can get him into mischief from time to time. Not leaving them alone for long periods of time will most certainly cub their mischief making habits.

Small and mighty are the Havashu’s. They are stronger than they appear and can handle a bit more rough housing than most pups their size. They make great family pets and are great with both children and other family pets alike. They are on high alert and will bark at the sound of strange noises and strange people, making them a terrific watch dog. They are very adaptable to most indoor living environments, but also very clingy, so don’t leave them alone to long or they can easily form separation anxiety.

This fun-loving pooch would play non-stop if allowed and can lean towards hyper-active if he doesn’t have an outlet for his energy. Short daily walks and lots of interactive play each day will keep this energetic little puppy busy and out of trouble.

Due to their intelligence they are relatively easy to train, but they are also sensitive and require lots of praise and self-assurance. It is important to start training very early as these dogs do require a bit of patience and time. Socialization partnered with training will make for a well-rounded and less anxious pup.

A Havashu is a designer hybrid cross bred between the Havanese and Shih Tzu.

What was the Havashu bred for?

This breed was developed for companionship, its competitive obedience and agility and to be an alert watchdog.

What are the health concerns associated with this breed?

How much does the Havashu weigh?

On average the Havashu weighs between 7 to 15 lbs.

How big does the Havashu get?

At full grown, the Havashu will measure between 8 to 12 inches at the shoulder.

How much will my Havashu eat?

The Havashu as a full grown adult will require about 1 cup of high quality dry pet dog food each day. This is to be split up into two separate meals-preferably one in the morning and one at dinner time.

What is the average lifespan of the Havashu?

The average life expectancy of the Havashu is between 12 to 16 years.

What is the temperament of the Havashu?

This charming little pup is cheerful, playful, social and very loving. They are highly alert which makes them excellent watch dogs and they are very responsive. Like that of the Havanese parent, they can have a streak of stubbornness.

Does the Havashu make a good family pet?

Yes. The Havashu breed is a great family dog and gets along great with children and other pets. They have a tendency to become very attached to their family.

Is the Havashu a good choice if I live in an apartment?

This is a great option for those who live in an apartment. This breed doesn’t need a whole lot of space and adapts very well to their environment.

They are not hypoallergenic, but they have very little to no shedding, which makes them a great option for owners who suffer with pet allergies.

Where does the Havashu originate?

This breed was developed right here in the United States.

What other names is the Havashu recognized as?

What clubs and organizations recognize the Havashu?

How much exercise does the Havashu require?

This little one will require a daily walk as well as some active play. A dog park is an excellent option for the Havashu to romp around and enjoy the socialization of other dogs.

The picture on the computer screen is the day we brought Sadie home and Sadie underneath the screen is now one year old. Sadie is the healthiest, happiest and sweetest dog we have ever had. Its hard to take her on walks, because she likes to socialize with everyone and everyone begs to stop and pet her, especially children. When we picked her up at Premier Pups I was so impressed with the facility and how clean it was. Premier Pups called me3-4 times the first two weeks when we had Sadie to check on her and make sure she was doing well. When we took Sadie to the vet for the first time, they were asking me where I purchased her because she was so well bred, healthy and strong. I highly recommend Premier Pups and especially the Havashu breed.

Juniper is such a blessing to our family! Our dog recently passed away unexpectedly and we were heart broken. I am so happy I found Premier Pups! I had such a hard time trying to contact breeders. No one got back to me! Premier Pups has great customer service. They answered all my questions right away! I was scared to adopt a puppy with out seeing them in person first BUT everything went so smooth and I would do it again in a heartbeat!! All of Juniper’s litter mates were also adopted very quickly!! From my personal experience, Juniper is a dream dog. She’s in great health, tons of energy and loves to nap! If you are thinking of adopting from Premier Pups, do it!! Juniper was meant to be a part of our family.

Compare the Havashu to Similar Breeds listed below 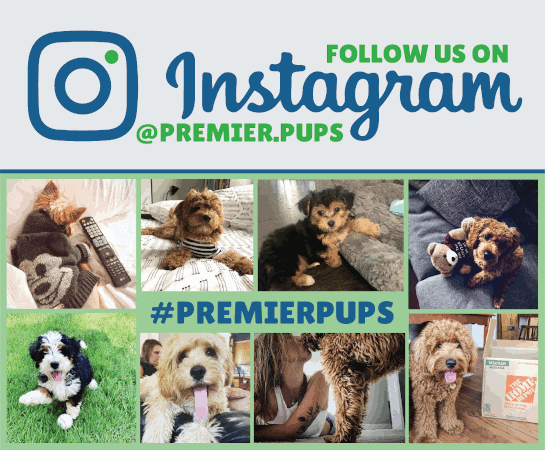