Tiny dogs with big personalities and a great deal of love to give is what defines Pomeranian dogs and Shih Poms. If you find yourself wanting to choose between the two, you are in for quite a challenge as these dogs are equally precious, cuddly, sweet, and clever. Read on to learn more about what makes them special, what qualities they share, what they love, and how they stand out from one another.

A puppy’s love is a pure thing and, here at Premier Pups, we aim to give our loving puppies the forever homes they deserve. Our specialized team of Puppy Agents is here to help you with the choosing process to make sure your new pup fits right in with your family.

The Pomeranian is a centuries-old breed that originated on the shores of the Baltic Sea in the Pomerania region. These tiny dogs are famously known for their fox-like appearance, fearlessness, and loving personality. They are loyal, sweet, and fun and you can never get bored with them around as they love to entertain. Although they are very small and adorable-looking, Pomeranian puppies have no clue of their actual appearance. They see themselves as big intimidating dogs and they have the courage and confidence to match their fantasy. Truth be told, Pomeranian dogs come from a big Spitz-like ancestor that was bred down in size by half during Queen Victoria’s reign, so in reality, their fantasy is not entirely fiction-based but rather a memory from their ancient history. The Pomeranian breed is also known as Loulou de Pomeranie, Pom, and Pom-Pom, and has been recognized by the American Kennel Club since 1988 as a member of the Toy Group. 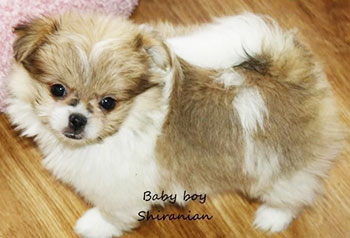 The Shih Pom puppies are a designer breed mix of a Shih Tzu and a Pomeranian. Compared to their parent breeds, these puppies are new to the world, having been around for a little over thirty years. The Shih Pom dogs originate from Northern America and have been designed by professional breeders to be half Pomeranian and half Shih Tzu. The offspring of these two beautiful breeds inherits some of their best qualities along with their gorgeous features. The Shih Poms can resemble one parent breed more or be a perfect combination of both. They are affectionate, clever, and playful and they inherit the hypoallergenic qualities of their Shih Tzu parent along with some great personality traits from both the Pomeranian and the Shih Tzu. Although they have been around for a fairly short time, the Shih Pom pups are amongst the most popular designer hybrids. They are often referred to as Shiranian, Shih Pomeranian, Pomshi, and Pom-Tzu and are recognized by the International Designer Canine Registry and the American Canine Hybrid Club (ACHC).

The Pomeranian and Shih Pom are two quite different breeds of dogs. The Pomeranian is an old breed with centuries of history and a set breed lineage, whereas the Shih Pom (Shiranian) is a modern crossbreed with a mixed gene pool and very little documented history. Since the Shih Pom is half Pomeranian, the two breeds do have some amazing qualities in common. Another aspect that stands out between the two is their health. As a mixed breed, the Shih Pom pups benefit from hybrid vigor which means that they are less likely to suffer from the same health issues that their parent breeds are prone to. On the other hand, Pomeranians are recognized by the American Kennel Club, whereas the Shih Poms have yet to become eligible to enter the club and receive their official breed recognition. 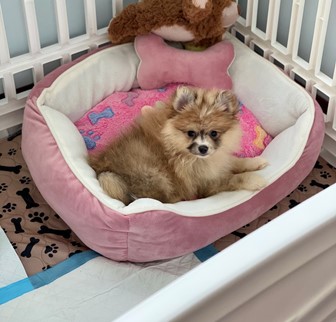 The Pomeranian pups are as lovely as can be. They are energetic enough to keep their owners on their feet playing a fun game of fetch, and relaxed enough to be up for a long day spent on a lap watching a slide show of dog pictures and documentaries. The Pomeranians are passionate about keeping their fur-ever homes in a cheerful mood. Their nature is kind and happy and they want everyone around to match them so they are likely to do whatever it takes to get there. They might perform a random dog trick or a cute stunt or simply jump on their favorite lap and indulge in some beneficial petting. For this reason, Pomeranians are considered to be among the best dogs for therapy work. We can safely say that Pomeranians are good and sweet dogs, but there is much more to them than meets the eye. Underneath that adorable fox-like look lies a fearless little canine warrior that is ready to defend what he loves. Pomeranians are brave and since they aren’t aware of their size, they will not back down if their humans are threatened. They make excellent alarm dogs and despite their size, they are fit for some guard duties.

Even though Pomeranians are affectionate and devoted, they are not the type of dogs that won’t let their humans leave their sight without following suit. They are of a more independent nature and don’t require nearly as much training during early puppyhood as other breeds do in order to be left alone. Another aspect that helps Pomeranians stand out from other small-sized breeds is their trainability and lack of stubbornness. Pomeranians are smart dogs that love the learning process. They are quick to pick up on their 7 basic dog commands and they are always keen on adding some new fun tricks to their repertoire. 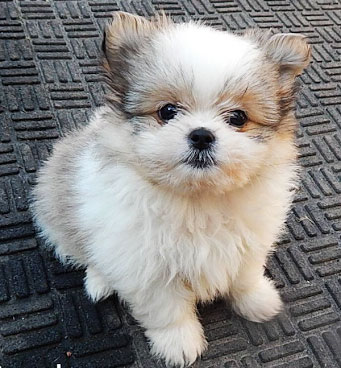 Shih Poms are cuddly, playful, and sweet-hearted dogs that love to be pampered, spoiled, doted on and adored 24/7. They crave the center of attention where all eyes are on them and they very much like to be the main attraction of the house. Their need for attention comes as no surprise as these dogs have parent breeds of royal descent. Both the Pomeranian and Shih Tzu spent the better half of their history being pampered and cherished on satin cushions and royal laps. As dogs of royal attitude, Shih Poms can be a bit challenging to train. Although they are eager to please and want to learn new things, they can be stubborn at times if the training sessions feel boring to them. Shih Pom puppies need praise, positive reinforcement, fun training methods, delicious treat rewards, and puppy toys and games that appeal to them. With their focus captured, these puppies make the best training students one could wish for. They are attentive, ready to learn, and fond of the attention that comes with training.

Another famous aspect about the Shih Pom (Shiranian) dogs is their strong loyal tendencies. These lovely dogs are completely devoted to their humans, so much so that they never want to leave their side. All of their hobbies include their family members and they are not particularly inclined to escape the leash and wander out of sight. Although their need to love and be loved by their owners can be seen as an endearing behavior, it does come with a side effect – they can’t be left alone. Shih Poms fit best with an owner that is with them all of the time, or an experienced dog owner who knows how to train a puppy to be independent, otherwise, these caring dogs might be prone to separation anxiety (which is very common among attached dogs).

The Pomeranian and the Shih Pom are very different when it comes to their personalities.

The Shih Tzu genes in the Shih Pom mix are a game-changer. The Shih Tzu is a somewhat stubborn dog when it comes to training and this is a strong trait that is passed down to the Shih Pom puppies. The Pomeranian on the other hand is a naturally obedient dog that loves to learn and excel, so you can expect your Shih Pom puppy to be somewhere in between. The Shih Poms are more relaxed and cuddle-oriented, whereas the Pomeranians are more energetic and eager to play. Despite their equally affectionate nature, Pomeranians and Shih Poms take being alone differently too. The Shih Pom dogs don’t fancy being left alone at all, whereas Pomeranians are more independent and might even look forward to some alone time. The Pomeranian dogs are a bit more vocal and a better fit for alarm/guard duties, whereas Shih Poms are generally quiet.

As for their common traits, both the Pomeranian and Shih Pom are good with kids, friendly with other canines, and open towards strangers. They both fit well with many types of owners/families, and they are both comfortable in small and large living quarters. They also make excellent therapy dogs and fantastic companion pets. 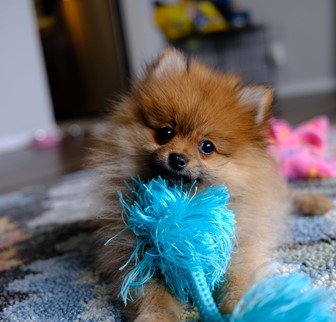 The Pomeranian is a tiny toy-sized pooch that resembles a small happy fox. Although orange is their most famous coat color, these fox-like dogs can have particolored or multi-colored coats with colors like white, cream, red, brown, blue, black, wolf sable, and brindle. The Pomeranian coat is long, thick, straight, and fluffy. Other features the Pomeranian has are - dark almond-shaped eyes, a short muzzle, pointy elfish ears, and a long, curled, and fluffy tail. As a member of the AKC Toy Group, the gorgeous Pomeranian stands at 8 to 11 inches tall and weighs 4 to 7 pounds fully grown. 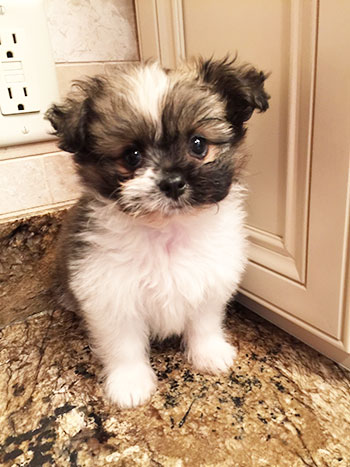 As a crossbreed, the Shih Pom appearance can vary quite a bit depending on which parent breed they take after most. They can resemble either of their parents or be a wonderful mix of both. Shih Poms have shiny dark eyes, raised or floppy ears, a short muzzle, and a long fluffy tail. Their coats are long, straight, and soft, and can be of a solid color or multi-colored with the most common Shih Pom colors being white, orange, sable, brindle, red, brown, and black. The Shih Pom size can differ from one pup to the next, with the average height being 7 to 12 inches and the average weight being 4 to 15 pounds. The Shih Pom sheds very little and is considered a hypoallergenic dog breed.

The Pomeranian and the Shih Pom are quite different in terms of appearance too. The Pomeranian dogs have an established breed standard, which means that they have a pretty defined appearance. Shih Poms on the other hand are not quite there yet as they are hybrids of two different-looking parent breeds and can take after either one. Pomeranians are a bit smaller and are known to shed seasonally, whereas Shih Poms tend to grow a bit larger and shed very little.

Although the Pomeranian and Shih Pom are quite different in both appearance and personality, we find them equally perfect. These dogs are very loving, devoted, vocal and quiet, friendly, attached and independent, caring, and smart. They are great with kids, playful, fun, and cuddly, which makes choosing between them very difficult. Thankfully, each of these dogs belongs with certain owners, and with that in mind, we recommend the cute little Pomeranian to novice owners, active families, and singles looking for a spunky, happy, and independent pup, and the gorgeous little Shih Pom to experienced owners, couples, and seniors looking for a devoted new addition to their family.