PHOTOS FROM OUR CUSTOMERS

Pugs are happy, gentle, and charming little dogs. Their personality is lively, their nature fun-loving, and their disposition affectionate. As even-tempered, sweet, and playful dogs, Pugs make wonderful playmates for kids of all ages and lovely companion pets for couples, singles, and seniors. These little joy bringers love to cuddle and are generous with their Pug love. When it comes to their family, Pugs attach like magnets. They are known to happily shadow their humans in every activity and are just as happy lazing on the couch all day as they are going for a long evening stroll around the neighborhood.

The Pug is a beautiful, small dog breed that enchants the world with its goofy personality and big heart. This lovely dog is one of the most ancient breeds in the world, having been around for over 2000 years.

The precious Pugs are originally from Ancient China, where they were raised on the lap of luxury. According to their extensive history, these animals were the lapdogs of Emperors during ancient times. They symbolized wealth and prosperity and were owned only by those in power. During their debut in China, Pugs could only be owned if they were received as a gift from the Emperor.

The Pug dog, who is also known as the Mopshond, joined the American Kennel Club in 1885. There is also a club called the Pug Club of America that was founded for the breed in 1931.

A beautiful dog in every way, the lovely Pug has a very distinctive appearance. It is small, compact, and very sturdy-looking. Some of the features that these adorable dogs are recognized for include their black masks or muzzles, cute facial wrinkles, large, dark eyes, and short, curled tails. They have short, triangular ears, and a short double coat that is shiny and fine.

As their breed standards dictate, Pugs can be fawn, black, silver, and apricot. Most commonly, they are found in fawn coloring. Black pug puppies, although in high demand, are quite rare.

Since these dogs are considered a low-maintenance breed, grooming them requires very little effort. They should be brushed at least once per week with a grooming glove, and given a bath every 4 to six weeks.

Pugs are very relaxed, calm-tempered dogs. They get along well with everyone and aren't known to have any type of destructive behavior or negative personality traits. These adorable pooches love to be around people and thrive in the presence of their families. However, because of their sensitive nature, they should be socialized at an early age to avoid them becoming shy as adults.

Pug puppies adapt quickly to their new environments and are just as quick to bond with their new families.

Thanks to their sweet, goofy, and kind nature, Pugs make fantastic companion pets for any type of owner. They're great for families with kids and perfect for seniors. The Pug's nature is lovey-dovey, which means this dog is a stranger to aggression. All he wants to do is cuddle, be pampered, and receive attention from his favorite humans.

Pugs love being with people so much that they rarely leave their owner's side. Because of their affectionate nature and need for companionship, they can become anxious if separated from their humans.

As a low active toy breed, the Pug requires very little daily exercise. Most of these cute pooches will do fine with one or two short walks per day and a game or two indoors.

Because of their short muzzles and short, fine coat, Pugs are not equipped to handle either hot or cold weather. They should be provided with a jacket during winter and kept in the shade during summer. Exercise should also be kept at a minimum to avoid over-exertion.

These toy-sized, loving family dogs are first and foremost people-pleasers. They crave attention and can be trained easily. With training a Pug puppy, patience and rewards are a must. Although they can sometimes be stubborn, a delicious reward can bring their focus to the task. Positive reinforcement can also go a long way in training these adorable toy puppies.

They are naturally friendly and will likely require very little socialization training to be sociable towards others. However, it is recommended to introduce them to others while they are still young to help them become less shy and more outgoing.

How long do Pugs live? The average lifespan of a Pug is between 12 and 15 years.

When do Pugs baby teeth fall out? Pug baby teeth typically start falling out between 8 and 16 weeks.

Do Pugs shed? Yes. Pugs have a double coat that sheds all year round.

Are Pugs good with kids? Yes. Pugs are very gentle and affectionate with children. They are neither aggressive nor jumpy, and they are considered one of the best dog breeds for families with children.

Are Pugs hypoallergenic? No. Pugs shed quite a bit and are not a good choice for owners who suffer from pet-related allergies.

How big do Pugs get? A full-grown Pug measures 10 to 11 inches and weighs an average of 14 to 25 pounds. The female Pug is a bit smaller.

What were Pugs bred for? Pugs are an ancient breed of dogs that have always been bred for companionship. In the past, it is believed they were bred to be the companion animals of the wealthy and powerful.

Are Pugs smart? Although they are considered average or below average when it comes to intelligence, Pugs make up for it with an affectionate personality like no other. These lovey-dovey dogs have high adaptive intelligence and great loyalty to their owners.

Are Pugs good dogs? Yes. Pugs are great dogs. They are friendly, outgoing, and very well-mannered around others.

Can a Pug swim? Yes, Pugs can swim, but this is not one of their strengths. Their short snouts and legs make it difficult for them to swim for long. It is recommended to supervise them when they are near water.

Are Pugs aggressive? No. Pugs have a gentle, warm, and caring temperament. Although they aren't known to be aggressive, it is always beneficial to socialise them early.

Do Pugs bark a lot? This breed is generally very quiet when it comes to barking. Pugs are not a talkative breed, which makes them ideal for apartment living.

How much do Pugs weigh? The average weight of an adult Pug is between 14 and 25 pounds.

Where do Pugs come from? The Pug breed is originally from China, where it was bred as a companion pet for the wealthy.

Are Pugs easy to train? Yes. Pugs are very fond of pleasing their owners and will go to any length to do so. Training them should be easy as long as they are properly motivated.

When do Pugs stop growing? Pug puppies typically grow until they reach 9 to 12 months.

Padre is very intelligent, happy, and healthy. I love being able to see him grow into his personality and who he is today from a little 8 week old puppy from back in April 2021. He is really goofy and loves to socialize. He has truly made a big impact on my life. Thank you so much.

We searched for SO long for our dogter and found her here! Ivy is transitioning well and, I feel, we are receiving great help with any questions that arise. Well worth the drive to pick up our furever dogter. P.S. She loves to go to work with mommy.

A few of our Cute Pug Pups Compare the Pug to Similar Breeds listed below 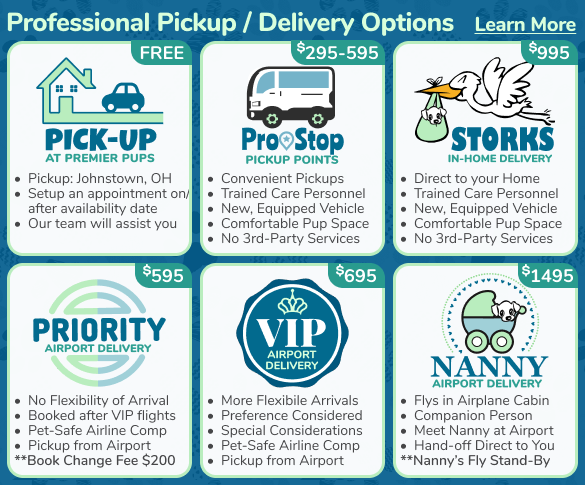 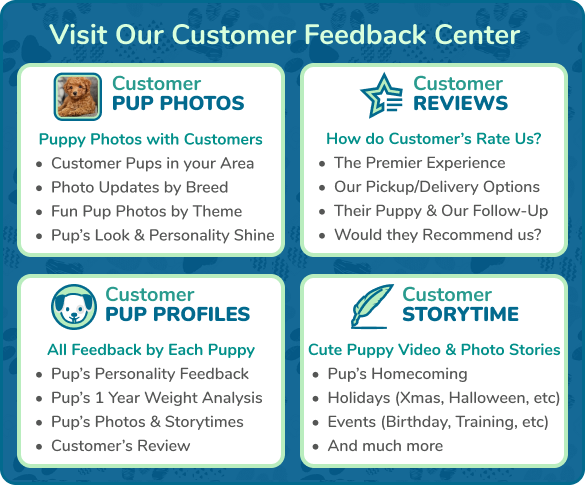 Like people, the most critical moments in a puppy's life starts in the beginning. It truly takes a special breeder to assist with nourishing and raising an Pug puppy properly. Only the nation's best Pug breeders can provide the best quality of life. Here at Premier Pups, we work hand-in-hand with our breeders. Providing a safe, natural, comfortable, and healthy environment for the nursing mother and her baby is essential. We only align ourselves with Pug breeders whose standards are much higher than the rest. We spend consistent on-site time with our selected breeders and can undoubtedly say that our puppies come from a caring environment.